To Mask or not to Mask: Their perceived importance in fighting Covid-19

The first time I put on the mask since Covid-19 outbreak was during a flight to Malaysia, just before Chinese New Year. Relatives were concerned I might be bringing Covid-19 to them hence I wore the mask to appease their worries.

When I got back to HK 2 weeks later, I noticed 90% of Asians on the street wore masks. “Should I wear mask?” I asked myself. After speaking to a few friends, I decided the answer should not be about me but the people around me.

Rather than guessing, Anny, a local Hong Konger and I decided to ask a few friends about their personal take on wearing the masks. Initially, we were thinking to collect feedback via whatsapp from 15 to 20 friends. Encouraged by the 50+ responses within 3 days, we decided to use google form. Within a week (February 17 to 24), we collected 367 responses from people all over Hong Kong.

We apologize the questions are only in one language and acknowledge the responses reflect those who are conversant in English only. Just to set your expectations right, both of us are volunteers for Localhood and are not data scientists nor researchers for any organizations.

Thank you to our friends (you know who you are) for helping us forward the survey questions around. Our deep felt gratitude to another friend and her team member who kindly helped with the analysis work. Last but not least, thank you to everyone who participated in this survey.

Clearly the locals and to a lesser extent the Asians were religiously wearing masks when they went out while less than 40% of the westerners/ Caucasians surveyed wore them.

In this graph it is interesting to note that among the overwhelming majority of the locals ans Asians who wore a mask 49% and 61% respectively of that population believed that wearing a mask helped in protecting them against Covid-19 infection to a certain degree.

Also notable is the fact that a huge portion (63%) of the "Expat" population did not believe in the effectiveness of the mask against infection.

This question was pretty straightforward and 51% of the respondents got their masks from Family and friends. In a way, the graph above could highlight the solidarity among the HK residents in times of crisis. 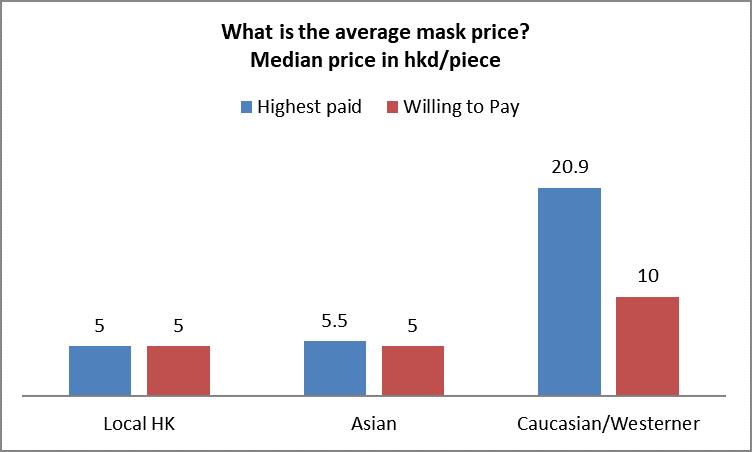 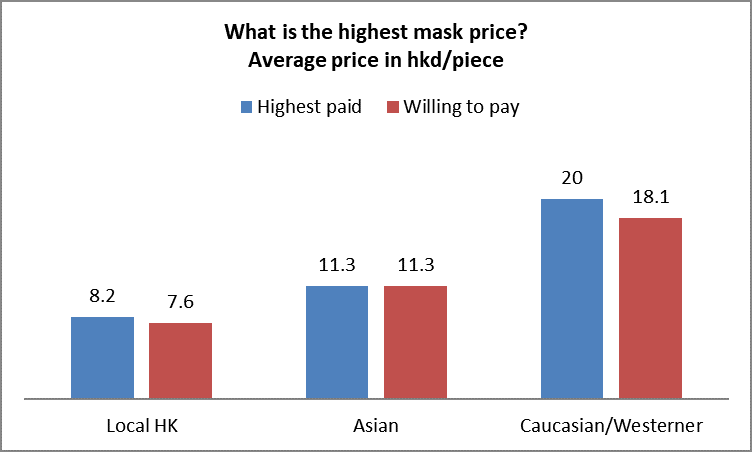 Interesting to note the paradox that while the Causacian/Western respondents did'nt believe in the effectiveness of marks against the Covid-19 infection (Question 2), they are still ready to pay a whooping 20 HKD per mask piece!

What is your perception of people without mask?

This is a free text compulsory question. Common keywords from the responses showed the following 4 themes from the lowest to highest number of responses.

I am jealous that they have the guts to not wear it on HK island. If i didn't put in on before leaving work, my dear colleagues will give me the look which I would rather avoid. It's better to fit in and comply with what others are doing even though I don't believe it protects me

Some people do not wear masks on the streets simply because they cannot afford them. I mean the extreme impoverished and old people without family support

Afraid of them, and feel so sad, will give some masks to them

Common key words were ok/okay, their choice and nothing.

It's personal choice just like taking vaccines, but for some it's sad that they don't even have a choice.

Up to personal choice, but best to put on for self protection and consideration to people around, especially in public areas and in circumstances of close encounters

Not responsible for the public

Put other people at risk

Question 8 (Optional): Any comments you will like to add?

Toby from Wan Chai Deeply disappointed to see a government with such huge financial reserves, that is so inadequately prepared to look after its own citizens and medical staff, so reluctant to properly secure its borders, so unwilling to implement competent quarantine provisions.

John Au Yeung from Central : The Government should have acted proactively to source masks globally and make them available to everybody at cheap price and the medical staff should be guaranteed with the best masks and protective outfits.

The upcoming US elections: A talk by Jennifer Jett, Ex-localHood Volunteer

Copy of Perspectives of a random HKer @ April Yu

In Pics: Hong Kong then and now